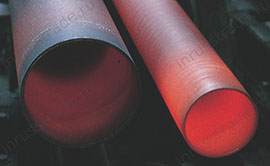 All pipes PAM-GLOBAL® are manufactured by the de Lavaux method of centrifugal cast. Pipes are made of vermicular graphite cast iron, according to DIN EN 1561. At the same time as a result of blast cooling in a metallic form a very fine structure is created. Fineness decreases from the outer edge of the pipe to its inner side. In the outer part of the cast-iron pipe structural constituents are approximately 30 times smaller, and in the inside part of the pipe - still about 20 times smaller than in the moulded pieces, produced by the usual sand casting method. One of the decisive advantages of the de Lavaux method is that after the pipe casting its blast cooling takes place. This thermal treatment leads to the formation of graphite rosette shape and thus to the improvement of the mechanical properties of cast-iron: including the reduction of internal stresses, the increasing of breaking stress. With subsequent thermal treatment of pipes PAM-GLOBAL® soft Brinell hardness number of about 210 is associated. In this regard, pipes can be easily processed: they are very well cut, among other things, also by means of electric pipe cutters for cast-iron pipes.

Covering and marking of fittings 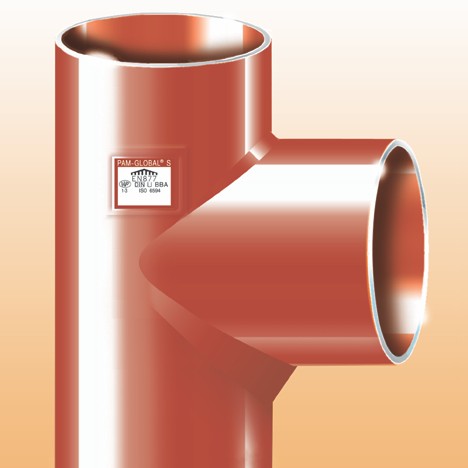 All fittings PAM-GLOBAL® are subjected to surface treatment of inner and outer surfaces by cataphoresis, phosphatizing, as well as are covered inside and outside by a protective epoxy layer that is applied by the way of dipping. Cataphoresis japanning by electrophoresis method refers to the highest quality and environmentally sound practice methods of surface treatment. Surface protection meets the highest requirements of corrosion protection. In addition, the surfaces provide excellent protection against mechanical impacts. Appearance is also excellent: the surfaces are without drops and stains. Covering  of fittings PAM-GLOBAL® are notable for excellent surface hardness, reliable setting strength with primer and alignment registration of the covering contours on the edges.