Fastening of Geberit pipelines is carried out with the special components - clamps, studs, mounting plates etc.

The table shows the dimensions of the galvanized pipes wich are required to create anchor point at various distances to overlap:

The second way of fixing is sliding bracket fastening, which is designed to support axial displacements of the pipe which are caused by temperature expansion or compression.

For diameters from 40 to 160 mm, the following Geberite fastening elements should be used:

For diameters from 200 to 315 mm, the following Geberite fastening elements should be used:

The following Geberit fastening elements are suitable for fixing the Geberit Silent-PP pipeline:

Geberit PP pipes are fixed on surfaces using supports wich are installed at certain distances. The intervals between them should be measured according to the schemes shown below. 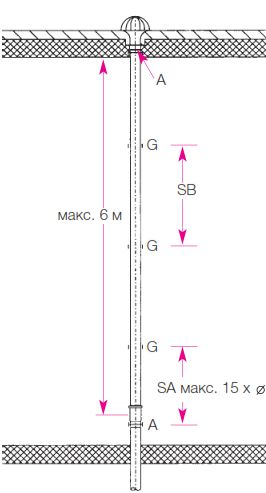 Geberit press systems are fixed  similarly - two types of supports are used for this:

The following rules should be observed:

Pipeline sections in which there is no direction change, or without an expansion joint can be equipped with only one anchor point. At the same time, in areas where there is a change in direction, the minimum distance when installing the first sliding bracket fastening is calculated based on the temperature elongation of the section.

On long sections of the pipeline, the anchor point is best mounted in the middle of the section - this provides a temperature expansion in both directions.